Want to beat the wintertime blues? 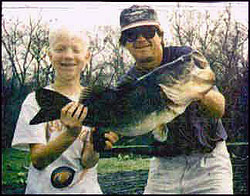 Nic Schmidt caught and released this nine-pound largemouth bass on a recent trip to Florida. His guide, Bob Stonewater, assisted with the release.

We felt badly for our friends and family back in Minnesota. In early January it was 100 degrees warmer on the St. Johns River in Central Florida than it was in Minnesota. My family and I were on the last day of a three-week vacation and we had hired a guide to show us how to catch those giant Florida bass.

The boys, Nic, age 12, Tanner, age 8, and I had visions of trophy bass taking our golden shiner minnows, and my bride Kay had visions of one more warm Florida day with a few fish as a bonus. We all got our wishes! Our guide, Bob Stonewater, expertly positioned the big Ranger boat and showed us how to lip-hook a golden shiner minnow under a bobber and cast it up against the floating hyacinth. Nic was the first to connect. A five pounder chased his lively minnow down and Nic set the hook with all his strength as the guide had instructed. Nic caught another, then another, before the rest of us started hauling them in. The sun was warm, the bass were biting and we were having a wonderful day.

The wind came up at midday so we moved from the open, everglades type part of the river upstream into a more secluded section. This was what we have all seen on those Saturday morning fishing shows: bald eagles swooping low to take minnows donated by the guide, Spanish moss hanging from the cypress trees, and bass lurking in every bay. Bass, gar, dogfish and pickerel were caught and released. Then Nic set the hook into something solid: a nine pound bass. The visions of trophies came true. Everybody reeled in. Nic had to keep his line away from the anchor line. He did a great job keeping the fish out of the hyacinths and keeping its head up toward the net. After many quick photographs and measurements, the bass was released. I caught a seven pounder, Kay and Tanner caught several nearly that large, and we all caught many more bass.

Two days later, reality slammed us in the face as we slid into our snow-plugged driveway and felt the sting of the sub-zero Minnesota winter. We were sure glad we squeezed in a day of bass fishing on our trip to Florida. There have been many good hatches over the last few years so there are lots of huge bass there now.

"I asked my wife and children which they would rather do: bass fish in Florida or return to Disney- world. Bass fishing was the unanimous choice."