After six weeks of a winter punctuated by ice storms and frigid temperatures, a TV filming trip to Florida seemed like a great break from the winter blahs, as well as an opportunity to put some shows in the can for next season. So it was off to Orlando last week with ace cameraman Jeremy Doyle, a long-time In-Fisherman staffer, now working freelance. We arranged to stay in DeLand, Florida and spend a few days bass fishing with Bob Stonewater, a veteran guide on that 330-mile long river. He’d been having great success using big wild shiners and warned us to bring heavy tackle to cope with big Florida bass in thick cover.

As the sun rose, we bundled up for a run down the river, with temperatures in the low 40s, not bad but far from shorts weather. Early on, the chilly night seemed to have put the damper on the river’s largemouths, which were lurking beneath vast mats of pennywort, water hyacinth, and giant Florida water lilies, many the size of elephant ears. After a few light takes and missed bites and a couple small fish, things started heating up, weather-wise and fishing-wise. 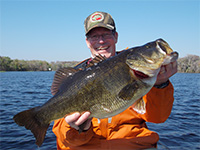 Around 11 a.m. my little Styrofoam float abruptly disappeared in a huge bulge that caused the weed mat to shake. Geared up with Fenwick’s toughest, 50-pound Sufix 832, and 5/0 Eagle Claw hooks, I set on a fish that proceeded to rip across the weedflat as line sliced through the vegetation. When she blew out of the water, Jeremy was rolling, and we soon had her in the net. When the scale read 9-10, I knew we were into some serious video. A chunky 8-pounder and a 7 soon followed suit, both coming from a large pocket in a pennywort bed. 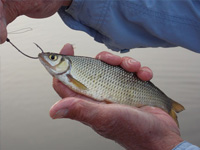 About Bait
While the bite was superb, it wasn’t fast. Indeed, at times the shiner would tow the float around a weedy pocket for 20 or 30 minutes before a hawg would venture over to give chase. In those conditions, missed fish are inevitable, and we also had run-ins with big “mudfish,” the local term for bowfin, as well as pickerel. The toothy critters did put a hurt on a lot of our 6-to 10-inch shiners that we rigged on Eagle Claw Weedless Shiner hooks, with the float pegged 2 to 3 feet above.

There’s nothing as attractive as these native shiners for big Florida bass. With heavy fishing pressure, they can learn to spurn even flavored softbaits and the coolest topwater plugs. But nature’s own, the bass’ lust for this food lies at the core of the its very being! Indeed, we tested the waters with a selection of fine lures, but scored not. Where artificials were ignored, shiners were engulfed, if after some minutes of waiting.

Stonewater, who plied the national tournament trail in the late 1970s and early 1980s noted that shiner fishing has taught him to be patient in fishing lures. “Once you find fish, keep working that area, changing lures until you get them to bite,” he recommends.

Shiner fishing is fun and exciting, since it’s highly interactive. The shiner is highly aware of bass approaching, and telegraphs this information to the observant angler. Sudden twitching, bobbing, and diving of the bright Styrofoam bobber almost certainly means a predator is approaching. Sometimes the float goes down, but becomes tangled in viny stalks, so you have to feel for your fish. Too much pressure and the tasty bait’s ejected, even after being fully engulfed in the stomach. Stonewater pointed out the telltale scrapes down the sides of a shiner, made as it’s pulled past the fish’s pair of crusher pads or spit out. You can even gauge the size of the missed fish by the distance between them. Under these weed mats, bass lurked many yards from the outside edge, and after pulling down a shiner might bolt back to the dark interior with its prey.

We found the bass generally in prespawn mode, as the big females were ripe with eggs but not quite ready to lay. Morning water temperatures warmed from 58°F to 60°F, rising to 61°F to 63°F over the course of three days that peaked in the mid-70°F range. When I lived in South Georgia and regularly plied Lake Seminole in spring, I noted that 62°F in early morning was typically when bass headed en masse to bedding areas.

Over the years, Stonewater has located many key prespawn holding areas, where current and baitfish are available near expansive sand flats where nests can be swept and guarded by male bass. The river’s tannic stain limits visibility to a foot or two, so sight-fishing would be a challenge for even the most eagle-eyed anglers. Indeed, in past pro events, competitors have found bedding fish in clearer spring runs or protected areas of lakes on the river, such as Lake George. Poking the rod tip into the bottom clearly defined the transition areas from mud or silt to sand.

The next two days followed in similar fashion and we ended with a marvelous tally of big fish—two between 9 and 10 pounds, four more over 8, and two more between 7 and 8 in a total catch of 42 bass. The St. Johns river is a national treasure, a beautiful lowland waterway with seemingly endless bass habitat. We also enjoyed watching countless bird species, and had eyes out for alligators and manatees. But the cooler weather seemed to have kept them down. We spotted a couple of boils created by manatees swimming below the surface, and a single 5-foot ‘gator. 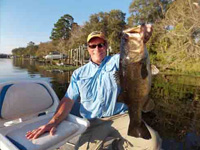 This place is a bass fisherman’s dream and I will be back.

To check out all the action, tune into In-Fisherman Television episodes early next year (2014). With the new seasonal format, shows are timed to correspond to present opportunities. For more information or to plan a winter getaway, contact Bob Stonewater at: Trophy Bass Guide Service, 386-717-6289.